The Church of St. Mary, followers of Christ, are inspired by our Catholic Faith to brough the Eucharist, Prayer, and Education, as the family of God, and with one another, we desire to live our faith in the world.

On Holy Thursday, all priests from the Diocese gathered at the Chrism Mass. The Bishop, together with the priests, prayed over the oils that are used during the celebration of the Sacraments. The three oils are: Oil of Catechumens, Oil of the Sick, and the Holy Chrism.

Holy Chrism, a blend of olive oil and balsam, is consecrated by the Bishop. Chrism is used in liturgical anointing of persons during Baptism, Confirmation, Holy Order (ordination to the priesthood and consecration of a bishop).

Holy Chrism is prepared from olive oil, but it also includes white grape wine, and a great number and variety of incenses and aromatic substances-57 different elements. They symbolize the variety of gifts of the Holy Spirit that the anointed person receives. The list of materials used for preparation and making of Holy Chrism dates from the eighth century A.D.

Here is what St. Cyril of Jerusalem (313-386 A.D.) says about the Holy Chrism in his instruction to the Newly Baptized at Jerusalem, in Mystagogic Catechesis, 3.3:

“Be sure, however, not to regard the Chrism as a mere ointment. Just as after the invocation of the Holy Spirit the Bread of the Eucharist is no longer just bread, but the Body of Christ, so when the Holy Spirit has been invoked on the sacred Chrism, it is no longer mere ointment. It is Christ’s gift which instills his divinity into us through the presence of the Holy Spirit. With a symbolic meaning, it is applied to your forehead and sense organs. Just as the body is anointed with a visible ointment, so the soul is sanctified by the hidden Holy Spirit. Each parish of the Diocese receives the Holy Oils. 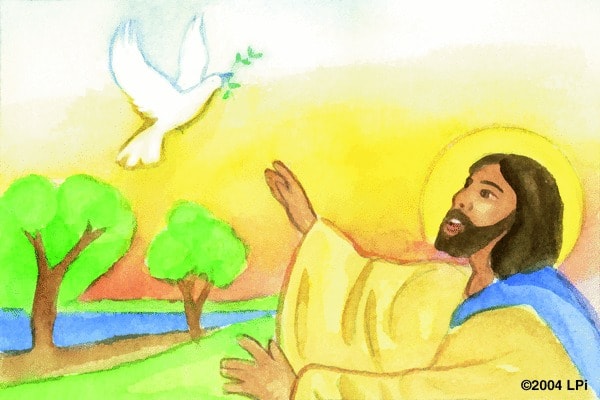 Breaking of the Bread

Have you ever been embarrassed to meet someone that you know you should know, but failed to recognize him/her? It happened to me a few times, and at those times, I would apologize and search for words, stuttering that the problem was with my memory, not of the person’s significance to me. In the story presented by Luke in his Gospel (Like 24: 13-35), two of Jesus’ disciples didn’t recognize their fellow Traveler on the road to Emmaus. As they finally realized who Jesus was in the breaking of the bread, “He vanished out of their sight” (Luke 24:31)

In this post resurrection appearance, Jesus slightly rebukes Clepoas and is companion for simply not being able to put as we say; two and two together and come up with the right answer. The Traveler, who joined the two on the road to Emmaus, had lived with them for three years, had pointed them to the words of the scripture, had demonstrated through His words and miracles the He was the Christ, and they still let their thoughts be preoccupied with sorrow and confusion. It is hard to imagine how the two of his disciples, being in the presence of the risen Christ, conversing with him, failed to recognize Him! Is it so hard to believe that?

We are too often in the actual presence of Jesus but fail to recognize Him. Like when we are with other believers in whom Jesus lives, when we read the Scripture, He is really there, when we join Him and others in the Eucharist, He is really present. But do we recognize Him?

Jesus’ rebuke is never intended to hurt but only to heal. He did not abandon the two disciples for failing to remember the teachings of the law or the prophets or for failing to recognize Him. Rather He took the time to walk with them explaining all the necessary events regarding His life. He had no intention of leaving them confused, in sorrow, or in ignorance, but opened the Scriptures for them, warming their hearts (Luke 24:32). Then, “He took the bread, gave thanks, and began to give it to them” (24:30) and at that moment, their eyes were opened and the truth of it all came together. The Lord has risen!

We should take great comfort in this encounter, when we are confused and bewildered, remember Jesus is truly present in the Eucharist.

Let us open our eyes to the truth: The Lord is risen indeed!